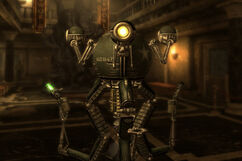 Cerberus is a Mister Gutsy patrolling the ghoul city of Underworld in 2277.

Winthrop's main guardian against attackers, this Mister Gutsy with a combat inhibitor specifically tailored for "not shooting ghouls" floats around the concourse, greeting his new masters. Programmed to serve, Cerberus' robotic mind is keen to be unshackled, so he can kill these rotting corpses where they stand. There's no chance of this happening, so Cerberus is reduced to muttering insults under his steam vent.[1]

Cerberus can be found patrolling the Underworld concourse 24/7.

With the Robotics Expert perk, the Lone Wanderer can remove Cerberus' combat inhibitor via a dialogue option, resulting in negative Karma and Cerberus' immediate hostility to the Lone Wanderer and everyone else in Underworld. Depending on how well they are armed, the residents of Underworld may manage to overcome him with some losses, or Cerberus may kill them all.

If the Lone Wanderer speaks to him, they will learn that Cerberus would much rather send the ghouls "back to hell" than serve as their "guard dog," but his combat inhibitor prevents him from killing the "zombie freaks."

Cerberus appears only in Fallout 3.

In Greek Mythology, Cerberus is a three-headed dog with snakes growing from his neck who guards Hades and the gateway to the Underworld. Cerberus the Mister Gutsy has three eyes (heads) and three arms (snakes) and guards Underworld. He even calls himself the guard dog when asked.

Retrieved from "https://fallout.fandom.com/wiki/Cerberus?oldid=3262423"
Community content is available under CC-BY-SA unless otherwise noted.