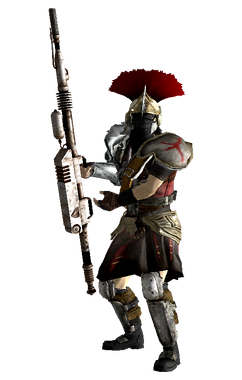 “Caesar's most trusted commanders are the centurions: battle-hardened front-line officers who dress in patchwork armor pieced together from their fallen foes.”— Fallout: New Vegas loading screens

Centurions are some of the highest-ranking officers of Caesar's Legion in the Mojave Wasteland in 2281. They serve as the main commanders of the Legion army.

Caesar based this rank on the unit leaders (centurio/centuriones in Latin) of the ancient Roman army. Ancient Roman centurions were recognizable by the horizontal fanned plume on their helmets and the greave plates on their shins.

Centurions are the most skilled and experienced members of the Legion's military; a legionary must personally serve in many campaigns and kill numerous opponents before they can qualify to become a centurion. Each centurion leads a centuria of 80 men (which includes 8 to 16 decanus officers). A group of 8 centurions leads a cohort of 480 men (the largest military unit in the Legion). Centurions are rarely encountered in the Mojave Wasteland; due to their vast experience they are too valuable to squander on minor scouting skirmishes, and Caesar is saving most of his centurions for his climactic assault on Hoover Dam.

While centurions do not have quite as much health as specialist elite units such as Legionary assassins, Legion vexillarii, or Praetorian guards, their armor is by far the strongest armor available to Caesar's Legion; built from armor pieces taken from enemies that a centurion has personally killed (including components from super mutant armor and power armor), it offers virtually the same level of protection as NCR Ranger combat armor. They are also equipped with the best weaponry the Legion has available.

Two different types of centurions appear in Fallout: New Vegas. The first type, referred to as "Legion centurion," will appear randomly in the Wasteland leading hit squads sent after the Courier if they have heavily negative factional reputation with Caesar's Legion. Their health and stats are actually identical to those of a Veteran decanus officer. However, their Legion centurion armor is vastly superior to the armor worn by lower-ranking Legion officers. They are also noticeably better equipped, carrying both a chainsaw and a hunting shotgun.

The second type of centurion referred to as simply "centurion," appears exclusively during the Second Battle of Hoover Dam. Their level and stats are random, based primarily on the Courier's current level. They are equipped with thermic lances or super sledges as well as hunting rifles, marksman carbines or anti-materiel rifles. Also, they carry several healing items on them, such as purified water, healing powder, and bitter drink.

Retrieved from "https://fallout.fandom.com/wiki/Centurion?oldid=3302395"
Community content is available under CC-BY-SA unless otherwise noted.