Centaurs are mutant creatures found in the Capital Wasteland in 2277.

Centaurs are the result of combining various kinds of animals and people and infecting them with the Forced Evolutionary Virus.[Non-game 1] These abominations are horribly disfigured creatures with little intelligence but an affinity for their super mutant masters.

Centaurs are, much like their namesake counterparts from the west, the result of the Forced Evolutionary Virus being used on a combination of humans and a myriad of animals. The centaurs of the East Coast stand almost as tall as an adult human. Their torsos lack arms, and their mouths are filled with three writhing tentacles. Some of its bones are also poking out from its body. Instead of legs, a centaur has multiple human arms that it uses to drag itself along the ground, which confines it to a slow, shuffling form of ambulation.

Centaurs are the constant companions of super mutants and are used as their watchdogs. As a result, they can easily be an indicator of more serious threats lurking nearby. As individuals, centaurs only pose a minor threat. They are durable as opponents and can sustain a rather large amount of damage before succumbing to their wounds. This is offset by their weak melee attacks in the form of their lashing tongues. They telegraph their close combat attacks quite decisively. Centaurs are also capable of ranged attacks which consist of radioactive spit. The spit does not cause significant damage aside from 5 rads/sec for 15 seconds. They are entirely silent creatures, lacking the ability to produce sounds of any kind, allowing them to sneak up on unwary targets.

The basic centaur variant in Fallout 3. They are slow-moving and often travel with a super mutant(s). Centaurs have both a long range and a close range attack. Centaurs are not major threats, however, they may cause trouble for anyone unprepared.

Clancy was a named centaur cut from the final release of the game. Although identical to normal centaurs stat-wise, Clancy's internal name associates him with the quest Wasteland Survival Guide. Although they cannot be found anywhere in the game, Clancy can be found in the game files.

Centaurs appear only in Fallout 3. 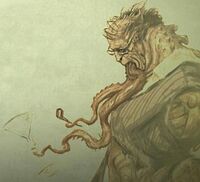 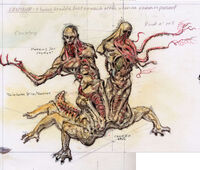 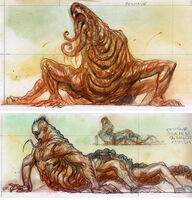 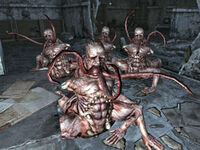 Centaurs rushing the Lone Wanderer in the Chryslus Building basement 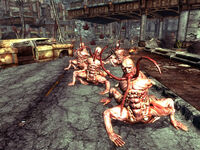 Another centaur infested place, Seward Square, near the skybridge