View source
“Super Mutants are often accompanied by Centaurs, which serve as "watchdogs" and alert their masters to danger.”— Fallout 3 loading screen

Centaurs are mutated hybrid creatures created from experimentation with the Forced Evolutionary Virus,[Non-canon 1] named for their malformed legs.

Centaurs encountered in New California and Mojave Wasteland were created by the Master, who utilized them for defense and transport. The creation process involved tossing a varied mix of different animals, including humans, dogs, and cats, into a vats of Forced Evolutionary Virus to be infected by the virus.[Non-canon 2][Non-canon 3][Non-canon 4] The creature that emerged was the centaur, caused by rapid FEV mutation.

Although species in different locations are varied, they are all are humanoid in appearance. Despite this, consuming them is not an uncommon practice, such as at Mom's Diner of The Den.[1] In other regions, centaurs were created by infection with the FEV along with super mutants in Vaults. They often accompany the super mutants, serving as watchdogs and alert their masters to danger. 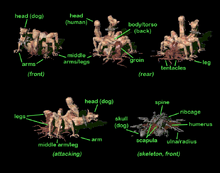 Centaurs are large, fleshy creatures consisting of human and canine components, named after its three pairs of leg-like arms.[Non-canon 1] Centaurs walk along the ground on their massive gash-covered torsos, with movement similar to that of giant ants. The rear pair of arms serve as the creature's legs, connected to the pelvis and driving movement. The front pair of arms assist in walking, but are connected to the shoulder blades and considered arms when targeted with an Aimed Shot, similar to both heads. The middle pair of arms may serve as legs, but are connected neither to the pelvis nor the shoulder blades. Each pair of arms has a bone structure similar to that of humanoids, although the hands only have three to four fingers.

Two-headed centaurs have two heads, one being canine and the other humanoid. Each head connects to the body by way of a thick, elongated neck, converging into the main body and spine at the base of the torso. The canine head struts when walking and will attack when one draws near. The canine head can also be seen biting at the human head, at which point the human head evades. A large number of red tentacles spill from the creature's midsection and writhes around on the ground. They extend under the centaur's torso and may lash out from under the base of the neck. Centaurs have a large rib cage and drooping spine situated along the back of the torso.

One-headed centaurs encountered in the Capital and the Mojave Wastelands are different from the two-headed variants. A muscular humanoid torso sits upright upon a sloped, insect-like abdomen. When walking, the front two pairs of arms drive the creature forward, with the rear pair dragging along the ground next to the abdomen. The centaur's torso sways when the body moves, with the limbs moving in slow, spasmodic motions.

Jagged bones sprout from the creature's spine and along the rear abdomen. Similarly, numerous teeth-like bones surround the torso's abdominal muscles. A single human-like head sits upon the torso, connected to the body by a wide neck. The centaur has concave eye sockets and three tongue-like tentacles sprouting from its mouth, reaching down the length of the torso. The centaur is covered in thick purple veins and its shoulders end in bony stumps.

Different variants of the creatures named evolved centaurs also exist in the Capital and Mojave Wastelands.[Non-canon 5] With generally the same body shape as others, evolved centaurs have tight, deeper toned skin and have grown a large number of tumors along the back. The creature's purple veins and protruding bone fragments are less prominent than the standard centaur. Evolved centaurs also grow larger and have darker-colored tongues.

All centaur variants are often found in heavily irradiated environments.

Two-headed centaurs are sizable creatures, with a canine head on the right and a humanoid one on the left, atop a large, misshapen torso and six humanoid arms that serve as legs. The canine head has a thick metal collar around its neck, adorned with spikes. Two-headed centaurs have only been encountered on the West Coast in New California.

This type of centaur has hands, arms, and a single human-like head containing three snaking tongues. It attacks by spitting a ranged, well-aimed, arching liquid at enemies that carries lethal doses of radiation. It is capable of igniting lingering gas vapors and in close quarters, it utilizes its long, three-pronged tongue for a melee attack.

A bigger and stronger variant of a centaur, they have significantly more muscle mass as well as thick clusters of tumors growing from their backs.

The largest variety of the evolved centaur, the giant evolved centaur is the most dangerous differentiation of a centaur. One is located in the Devil's Throat in the far northeastern reaches of the Mojave Desert. 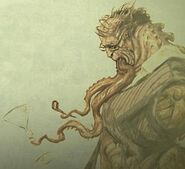