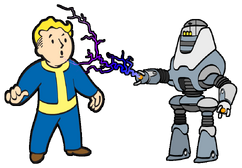 “There's only one way to fix the incorrect Census tally... murder.”

Event: Census Violence is an event quest in Fallout 76.

Defend a robotic census taker as he is attacked by waves of enemies.

Start by interacting with the Census taker. After he is done talking he will begin a five minute countdown where the Vault Dweller should defend him. During this time he wanders around while waves of enemies spawn. After the timer is up the quest is completed. If the Census Taker is destroyed, the quest is failed.

Retrieved from "https://fallout.fandom.com/wiki/Census_Violence?oldid=3469107"
Community content is available under CC-BY-SA unless otherwise noted.