The cell blocks are two buildings inside the NCR Correctional Facility in the Mojave Wasteland in 2281. They house several Powder Gangers, including Carter, who serves as a merchant.

This cell block has four cells, two to each side. The cells to the left consist of five bunk beds each, which the Courier is free to use. The two cells to the right contain a few bunk beds less than the other. Just above the outside entrance to cell block A, a sign reads "cell block A → J."

The second cell block has the same layout as the first, consisting of bunk beds within the cells. Uniquely, in this cell block, two of the cell doors can still be opened and closed. The sign above the outside door reads "cell block K → Z."

Taking items here counts as stealing, so if the Courier is caught, the Powder Gangers will become hostile.

The cell blocks appear only in Fallout: New Vegas. 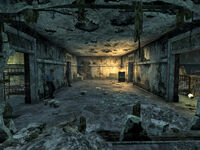 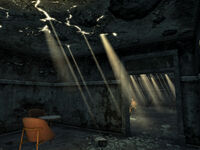 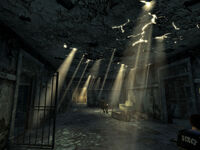