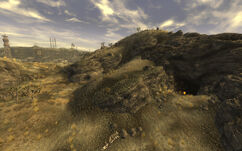 The cazador nest is a location in the Mojave Wasteland in 2281. It is located west of Ranger Station Delta and southwest of the Hoover Dam.

Populated by several cazadores, this location is purely external with no caves or structures to enter. There is a hollowed-out rock on the right. Next to a human skeleton are two containers, which include an "adventurer's pack" and an explosives crate. There is a small campsite on a hill northwest of the area with a campfire, locked ammunition box and locked mine box.

The cazador nest appears only in Fallout: New Vegas.

This location is called "mole rat nest" in the German, Italian, French and Spanish release of the game, which also coincides with the name of the cell. This alludes to the developers originally planning on placing mole rats here rather than cazadores.

The explosives crate, a .44 Magnum revolver and the adventurer's pack

Add a photo to this gallery
Retrieved from "https://fallout.fandom.com/wiki/Cazador_nest?oldid=3470866"
Community content is available under CC-BY-SA unless otherwise noted.