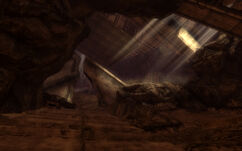 The Cave of the Abaddon is a location in the Divide in 2281.

The Cave of the Abaddon appears only in the Fallout: New Vegas add-on Lonesome Road.

"Abaddon" is an intensive form of the Hebrew word Abad, meaning "destruction." In the Christian Bible's Book of Revelation, Abaddon is the name of a male angel seen in a vision as a king of an army of locusts.

The Auto-Doc does not remove addictions, although it performs its other functions, even after patch 140525. [verified] 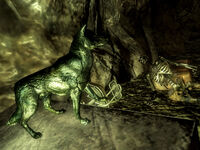 RALPHIE poster
Add a photo to this gallery
Retrieved from "https://fallout.fandom.com/wiki/Cave_of_the_Abaddon?oldid=3469037"
Community content is available under CC-BY-SA unless otherwise noted.