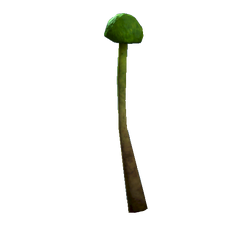 Cave fungus is a consumable item in the Fallout 4 add-on Far Harbor.

Cave fungus is an edible mushroom that has the ability to decrease one's radiation by 10 upon consumption. Its appearance is identical to the glowing fungus.

Cave fungus is found in the base game data but is not present in the game. It is only obtainable in the add-on Far Harbor or by using console commands.

Retrieved from "https://fallout.fandom.com/wiki/Cave_fungus_(Far_Harbor)?oldid=3373174"
Community content is available under CC-BY-SA unless otherwise noted.