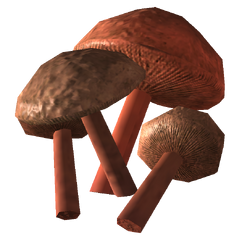 1 Hit Point per second for 4s
-10 RadiationHardcore mode only:
-15 Starvation

Cave fungus is a consumable item in Fallout: New Vegas.

Cave fungi are pieces of fungus skewered on a stick, like a "kebab." They are mostly found in the east, and its curative properties are the basis of most tribal medicines. They are difficult to find in the Mojave Wasteland and are mainly used to make Hydra. They are identical in appearance to that of iguana bits and strange meat.

In the Honest Hearts add-on, there is an abundance of cave fungi in the caves of Zion Canyon. The fungi that can be harvested glow bright red, and are usually bunched together with fungi that glow green, yellow, blue, or white. Instead of the skewer appearance, these cave fungi appear as several red mushroom caps.

In the Old World Blues add-on, there is another variant named mutant cave fungus which provides different benefits.

Retrieved from "https://fallout.fandom.com/wiki/Cave_fungus_(Fallout:_New_Vegas)?oldid=3164383"
Community content is available under CC-BY-SA unless otherwise noted.