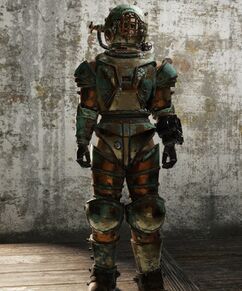 The cave diving suit is a piece of armor in the Fallout 76 update Steel Dawn.

A radiologically-hardened diving suit, the outfit consists of a copper colored outer metal layer which has green patina and barnacles covering large areas of its surface, and a tan colored under suit. There is a pressure tank mounted on the back and a hose connected to a pressure gauge on the helmet. The suit allows the wearer to breath underwater and grants immunity to water radiation and disease.

The suit can be found in a chest, overlooking the large water pools in Kerwood Mine which lead to the flooded section of the mine.

Clipping issue
Add a photo to this gallery
Retrieved from "https://fallout.fandom.com/wiki/Cave_diving_suit?oldid=3468153"
Community content is available under CC-BY-SA unless otherwise noted.