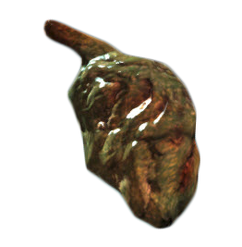 A cave cricket gland is a consumable item in the Fallout 4 add-on Nuka-World.

An insectoid gland belonging to cave crickets found throughout Nuka-World. It restores 15 hit points upon consumption but also confers 11 points of radiation damage to the Sole Survivor.

Can occasionally be dropped by cave crickets.

Retrieved from "https://fallout.fandom.com/wiki/Cave_cricket_gland_(Nuka-World)?oldid=3315323"
Community content is available under CC-BY-SA unless otherwise noted.