Cavern is a random encounter in Fallout 2.

A cavern is a kind of map in which some of Chosen One's random encounters take place. For a random encounter to take place in a cave map, the tile on the world map must be of the mountainous variety. In such an encounter, there is always a primary encounter with some sort of critter(s), hostile or non-hostile, outside the cave. The Chosen has the choice to enter or not enter the cave during or after dealing with the primary encounter (if it requires action to deal with).

When the random encounter begins, a Luck roll determines whether the cavern is inhabited or empty. Failing this roll results in the cavern being empty. If the roll is passed, the cavern will be inhabited. All critters found in such caverns are hostile. Some of them pose little threat to a reasonably traveled character -- others are very dangerous. A cavern can contain either:

Robbers are the most dangerous (and experience-rewarding) of these encounters. Their stats and equipment are determined by the player character's level and max out at level 19. At such high levels, the robbers wear combat armor and tote rare top-end weaponry. They also guard chests containing weapons, money, or stimpaks. If the player character can survive the battle, they will harvest dozens of stimpaks, thousands of coins, hundreds of rounds of high-end ammunition, dozens of very rare, expensive and powerful weapons, as well as thousands of experience points.

This cave has no entrance. 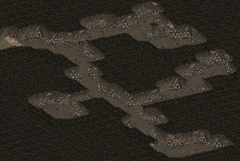 The cave itself, divided to four dead-ends.

The cave itself, almost identical to Vault 13's cave. Another unfinished vault?..

The cave itself, almost straight dead-end. This is a copy of the Toxic caves' first level.

The entrance to cave and the exit from (no difference between them), surrounded by trees. 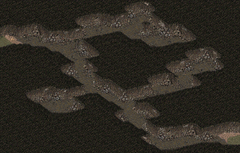 The cave itself, a Cave 1 copy with second exit holed out.

When the Chosen One enters the cave, Cave06.msg's messages are displayed.

Retrieved from "https://fallout.fandom.com/wiki/Cave_(random_encounter)?oldid=3188900"
Community content is available under CC-BY-SA unless otherwise noted.