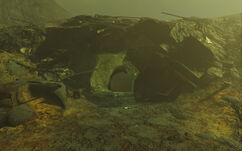 There are two locations called cave in the Glowing Sea in the Commonwealth in 2287.

The first cave is located halfway between the edge of the Glowing Sea and Crater of Atom, and slightly northeast of the capsized factory; the second is located further south, just below the southern border of the map, slightly south-west of the vertibird wreckage.

The first cave's entrance is located in a small trench, leading straight into a flooded tunnel with walls lined with scrap. In the center of the tunnel (as part of the cave itself) is the wreck of a flipped over bus, where a radscorpion or deathclaw may spawn. The cave itself has an L-shape, and can be traversed in a matter of seconds, ending a few feet away from an unmarked Red Rocket station. The Red Rocket station has a small interior consisting of three rooms, one containing a master locked safe, and another a button to open the station's rolling shutter, revealing a car with a wooden crate in its trunk.

The entrance to the second cave is a hole covered by metal scrap tucked into a hillside. Located between relay tower 0DB-521 and Crater of Atom and northwest of Skylanes Flight 1665. The interior is lined with debris, similar to the first cave, and takes the form of a small crescent-shaped hallway carved in the hill that has open exits a few feet away from each other. Inside is a power armor frame with raider power armor next to a dead raider and the ham radio broadcasting the distress signal.

These caves appear only in Fallout 4.

View of the Red Rocket from the northern cave

The northern cave view from the Red Rocket

The second entrance to the northern cave

East entrance to the southern cave

Power armor in the southern cave
Add a photo to this gallery
Retrieved from "https://fallout.fandom.com/wiki/Cave_(Glowing_Sea)?oldid=3403527"
Community content is available under CC-BY-SA unless otherwise noted.