BeardThin
EyebrowM
“The President is scheduled to arrive sometime in the afternoon. It's going to be a short visit to boost morale for the NCR troops. He's going to arrive, give a speech, and then leave. No meet and greet, no questions, just a quick in and out. They're probably afraid something is going to happen. For good reason.”

Cato Hostilius is a frumentarius in Caesar's Legion stationed around Hoover Dam in 2281. He appears only if the player character has started ​​the quest Arizona Killer.

Cato Hostilius is charged with reconnaissance against the NCR in Hoover Dam, specifically with finding a way to assassinate President Aaron Kimball during his speech.[1] 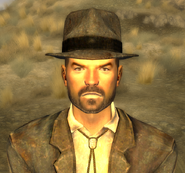