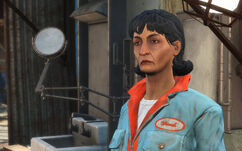 “You look terrible. Have my boy John straighten that mess on your head.”

Cathy is a hair stylist living in Diamond City, in 2287.

Cathy is the mother of John, who followed in his parent's footsteps in cosmetology.[1] Together, they run Kathy & John's Super Salon in the Diamond City market. As her son cuts and styles hair, Cathy will gossip with the customer, frequently in regards to what residents are or are not synths.[2]

The player character can overhear Cathy's criticism of her son, in that he is not measuring up to the skill of his father. When she tells him that his father would be disappointed in him, John shrugs it off, mentioning that "he and [his] Pa got along great."[3] Before Cathy can escalate the conversation further, her son says he won't have the conversation again, and asks her to just allow him to work.[3]

Cathy's conversations with other residents are similar in sentiment. Darcy Pembroke may approach Cathy, looking for her husband Paul.[4] Darcy shares that her husband is missing, and she is beginning to worry about him. Cathy asks why she is worried, and comments that she thought it would be Darcy's dream come true.[4] Darcy retorts, asking why she would say such a thing, and affirms her love for her husband. In response, Cathy replies that Darcy indeed loved his money, when he had any, to which Darcy says she doesn't have to stand there and listen any longer.[4]

Cathy appears only in Fallout 4.

Retrieved from "https://fallout.fandom.com/wiki/Cathy?oldid=3452140"
Community content is available under CC-BY-SA unless otherwise noted.