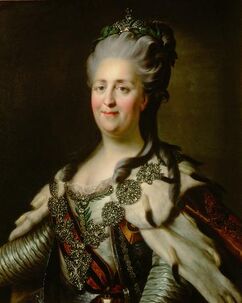 She was born in Stettin, Pomerania, Prussia as Sophie Friederike Auguste von Anhalt-Zerbst-Dornburg, and came to power after her husband, Peter III, was overthrown at the end of the Seven Years' War. Her accession to power rule of her empire often relied on her noble favourites, most notably Grigory Orlov and Grigory Potemkin.

Under her reign Russia was revitalized, being known as Russia's golden age, growing larger and stronger than ever and becoming recognized as one of the great powers of Europe.

On November 16, 1796, Catherine suffered a stroke and died at the age of sixty-seven. She was buried at the Peter and Paul Cathedral in Saint Petersburg.

Catherine the Great is mentioned only in Fallout 2.

Retrieved from "https://fallout.fandom.com/wiki/Catherine_the_Great?oldid=3143734"
Community content is available under CC-BY-SA unless otherwise noted.