Catch the Commie board game 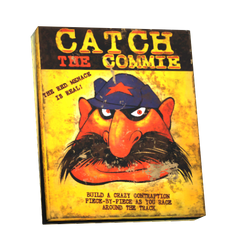 The Catch the Commie board game is a junk item in Fallout 76.

Catch the Commie is a board game made by the Don't Be Bored Games Company. The game requires players to first cooperate to build a trap then compete against each other to catch to see who can catch the most communists. The game comes packaged in a yellow box with the caricature of a communist on the front.

The game is a reference to the real-life mouse trap board game, made by Hasbro.

Retrieved from "https://fallout.fandom.com/wiki/Catch_the_Commie_board_game?oldid=3279611"
Community content is available under CC-BY-SA unless otherwise noted.