Daily: Someone To Talk To

Cats are creatures found in Appalachia.

Before the Great War, domestic cats were a popular household pet. They were known for their companionship and for hunting common household pests, such as rats. Cats survived the nuclear holocaust, subsequently existing in reduced numbers, found commonly throughout the regions of Appalachia. Similar to before the war, cats are usually found near human habitation.

Small, four-legged felines that meow and purr. Cats have a long, flexible tail, pointy ears and whiskers. There are different breeds of cats, varying slightly in fur color, pattern, and size. They are agile and can jump short distances, such as from the ground to a countertop. Some cats live independently in their home of choice, and others are the pets of wastelanders.

They will flee when confronted with combat situations, returning to their homes after the threat has dissipated. They will resume spending time on their favorite activities, including but not limited to licking their cat bowl or taking naps. Cats appear as either unique variants or a generated cluster of three level 1's with different breeds as their names, tabby equating to house cat.

A common house cat found all across Appalachia. They may either be grey, black or tabby.

Cats may not become Scorched. 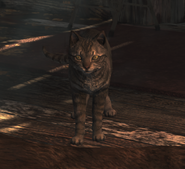 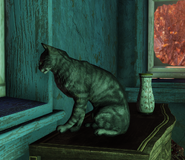 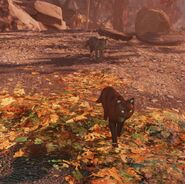 A band of wild cats
Community content is available under CC-BY-SA unless otherwise noted.
Advertisement