“This, uh, cat fancier's magazine has no redeeming value. You'll learn nothing of use to you in the wastes when you read about...cats.”— Fallout 2 Official Strategies & Secrets

Cat's Paw magazine is a Fallout, Fallout 2 and Fallout Tactics item. It is part of two side-quests in Fallout 2.

In Fallout, the item is quite mysterious, and the only descriptions are "You have no idea" and "Upon further inspection, you still have no idea what this is." In Fallout 2, Cat's Paw is understood to be a pornographic magazine.

In Fallout 2, if the Chosen One collects 10 magazines and brings them to Miss Kitty, they can receive a special Cat's Paw issue no.5 "that contains a very interesting article on energy weapons" in New Reno. Typhon in Broken Hills will also ask them to find an issue for him.

Among other places, issues of Cat's Paw can be: 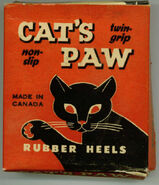 Add an image to this gallery
Retrieved from "https://fallout.fandom.com/wiki/Cat%27s_Paw?oldid=2332482"
Community content is available under CC-BY-SA unless otherwise noted.