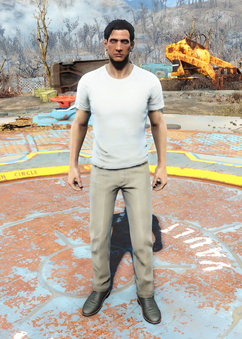 The casual outfit is an outfit in Fallout 4.

There are two different verions of the outfit, sharing the same name. Both versions leave only the head slot free, and thus cannot be worn with armor.

The second version always consists of the blouse with tan slacks and white loafers, on both male and female characters. This version, in addition to weighing more and having a higher caps value, also adds a single point to both Perception and Charisma when worn.

Despite Nora wearing this outfit, it cannot be found in Vault 111. This is also the case with the pre-War outfits of the other inhabitants.