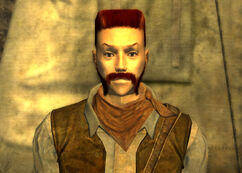 “I'm not really much of a historian. The short version is that the Rangers are the elite of the NCR military. Best fighters in the wasteland.”

Comm Officer Castillo is an NCR Ranger living at Ranger station Alpha in 2281.

Not much is known about Castillo, except for the fact that he is an NCR Ranger and is the communications officer of Ranger Station Alpha. The Courier has no unique interactions with him other than during the quest Return to Sender in which he is the recipient of a radio security upgrade code.

Retrieved from "https://fallout.fandom.com/wiki/Castillo?oldid=3122587"
Community content is available under CC-BY-SA unless otherwise noted.