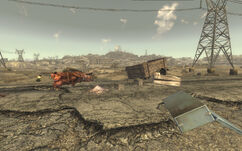 “Lost my caravan heading north, the driver burned to ash - and they didn't even take the cargo, they just burned that, too.”— Cass

The Cassidy Caravans wreckage is a location situated southwest of the Grub n' Gulp rest stop in the Mojave Wasteland in 2281.

The wreckage is all that remains of Cassidy Caravans, the family company belonging to Rose of Sharon Cassidy. The Courier is sent by Alice McLafferty of the Crimson Caravan Company to purchase Cass' business in an attempt to eliminate any and all competition. Cassidy Caravans met its demise here in the interim.

The caravan ruins contain a dead brahmin, a wooden cart, one small crate with various loot, several small wooden boxes and crates, an ash pile, and many drained energy cells scattered on the ground. It is possible to encounter cazadores nearby, as well as legionary assassins.

The Cassidy Caravans wreckage appears only in Fallout: New Vegas.

Evidence at the crime scene
Add a photo to this gallery

Retrieved from "https://fallout.fandom.com/wiki/Cassidy_Caravans_wreckage?oldid=3386952"
Community content is available under CC-BY-SA unless otherwise noted.