Kings' Gambit
For the Republic, Part 2
Oh My Papa
How Little We Know
The House Has Gone Bust!
Still in the Dark
You'll Know It When It Happens
Eureka!

Caucasian
“A fair question, and one I've had our strategists think about for some time. Their consensus is that we must focus on the one thing we can count on. With the Brotherhood that's their obsessive attachment to technology. They'd never go anywhere that didn't have working power. I'm willing to bet that wherever they're hiding, there's a working reactor powering their equipment. That's their vulnerability. Detonate that reactor, and we can safely cross the Brotherhood off our list of concerns. Was there anything else?”

Colonel Cassandra Moore is the commanding officer of the NCR Army forces stationed at Hoover Dam in 2281.[1]

Moore volunteered for the NCR military at the age of 16. Despite some odd looks at first, she got top marks during her training and received an officer's commission at the age of 17. During this period, she took part in operations against various gangs plaguing the NCR territory, sharpening her skills on the likes of Jackals and Vipers, as well as surviving four tours of duty against the Brotherhood of Steel in California,[2] and is widely considered to be one of the most skilled and accomplished commissioned officers in the NCR Army. She is a noted conservative in military matters, favoring strength and determination over cunning and diplomacy. Chief Hanlon says that she is "better at making graves than making friends."[3][4]

Eventually, she was invited to join the New California Republic Rangers. She considers years spent in their ranks as the best of her life, doing something important and with the freedom to do it as she saw fit. She was forced to leave the Rangers after a major injury.[3][4] Although she was subsequently promoted to colonel, a job which was less physically demanding, and given greater responsibility, she still misses those times, and she has never liked having to command from a desk.[3][5]

Moore is not completely bitter, however; she recognizes that holding high rank means getting the chance to have a much wider-reaching influence over events than is ever possible as a junior officer. She considers having the power to have things done her way, without having to tolerate disagreements, as a perk.[6] Her commanding style usually results in the earth being razed and fields salted, as Chief Hanlon puts it.[4][Non-game 1]

A war hawk, Moore displays unfailing support for General Lee Oliver and President Aaron Kimball's push to seize the Mojave - support which has seen her gain great influence - and considers strong action to be the best means of ensuring NCR's dominance in the region. She goes out of her way to neutralize or destroy groups and people that oppose the NCR in any way, such as the Great Khans, the Brotherhood of Steel, the Omertas and the Kings, whether it's in the NCR's interests, or because of her own personal grudges.[Non-game 2]

As such, any solutions that do not involve exterminating the Khans, the Brotherhood or the Kings will earn her ire; particularly if they include forging an alliance and/or peace. She speaks critically of Ambassador Crocker and his more diplomatic approach to NCR's expansion into Vegas and will vow to push back against him if the Courier chooses to support his approach to the Kings and Freeside above hers. Ultimately, Moore is well aware of her own greatest virtue as a soldier: she gets results, and her superiors care about that more than anything else.[6]

Effects of the player character's actions 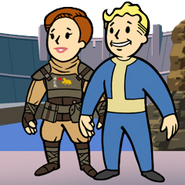 Colonel Cassandra Moore and Vault Boy, as they appear in the achievement/trophy for For the Republic, Part 2