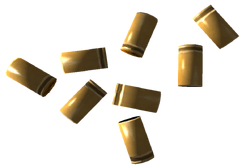 Case, .45 Auto is a crafting component that appears in the Fallout: New Vegas add-on Honest Hearts.

This item is used as a component to create .45 Auto ammunition on the workbench along with some lead, a large pistol primer and pistol powder.

These casings can not be acquired before traveling to Zion Canyon even with Honest Hearts add-on installed, as they are not available with vendors, and no enemies will use .45 Auto ammunition before that point.

Retrieved from "https://fallout.fandom.com/wiki/Case,_.45_Auto?oldid=3232194"
Community content is available under CC-BY-SA unless otherwise noted.