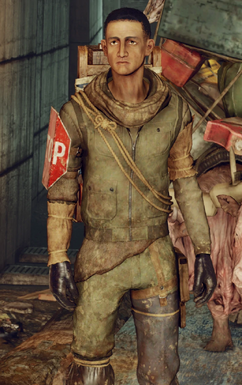 Carver Timmerman is a client of the Blue Ridge Caravan Company shipping caravans of his family's furs and furniture through Big Bend Tunnel in 2103.[1]

Carver comes from a family of hunters who supplied Van Lowe Taxidermy before the war.[2] He mentions that he was born in Appalachia, but his mother moved them some time after the Great War. Now they live in a settlement in the former state of Kentucky.[3] As a child, Carver was very sickly. In November 2077, a few weeks after the bombs dropped, his mother Deb[4] sent a message to Shelley van Lowe, a close family friend,[2][5] describing how Carver suffered from a cough and was becoming unnaturally skinny. However, he survived this sickness and grew up into a young man.[6]

As of 2103, Carver is the merchant responsible for his family caravan, contracting the Blue Ridge Caravan Company for transit through Big Bend Tunnel during the event Riding Shotgun. He is a nervous and insecure person and hesitates in critical situations. He is romantically interested in Libby Wen, though his awkward nature and her lack of interest in a relationship causes her to shut down those dreams.[7] In a conversation with Libby, he admits that he is the only member of his family that can run shipments for the caravan, as his mother is sick and Shelley is occupied with her duties as a trapper.[5]

Carver Timmerman appears only in Fallout 76, introduced in the Wastelanders update.

Retrieved from "https://fallout.fandom.com/wiki/Carver_Timmerman?oldid=3436070"
Community content is available under CC-BY-SA unless otherwise noted.