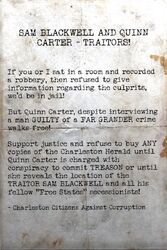 Carter and Blackwell - Traitors! is a paper note in Fallout 76.

If you or I sat in a room and recorded a robbery, then refused to give information regarding the culprits, we'd be in jail!

But Quinn Carter, despite interviewing a man GUILTY of a FAR GRANDER crime walks free!

Support justice and refuse to buy ANY copies of the Charleston Herald until Quinn Carter is charged with conspiracy to commit TREASON or until she reveals the location of the TRAITOR SAM BLACKWELL and all his fellow "Free States" secessionists!

Previously, two copies of this note could be found at the Charleston Capitol Building; one next to the crime log terminal and one in the governor's office. However, when the interior was redesigned and split with patch 1.2.2.9 (patch 12), these copies were removed and the note can no longer be acquired in the Capitol Building. The other locations of this note were unaffected.

Morgantown trainyard
Add a photo to this gallery
Retrieved from "https://fallout.fandom.com/wiki/Carter_and_Blackwell_-_Traitors!?oldid=3377830"
Community content is available under CC-BY-SA unless otherwise noted.