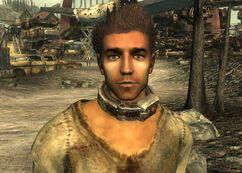 Carter is a slave of Paradise Falls in 2277.

Carter is desperate to escape, and his mind has deteriorated so much in the last few weeks that he is prepared to risk almost certain decapitation by trying to sprint to freedom. He needs to time his escape to just the right moment. He is sure Forty does not have the means to control his slave collar.[1]

When the Lone Wanderer is first allowed entry to Paradise Falls and gets close to the entrance, Carter will come running by. Moments after, his collar explodes, killing him.

Carter appears only in Fallout 3.