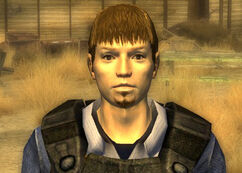 “I was always the guy who could get things, if you know what I mean. Figured I might as well keep on doing it.”

Carter is a Powder Ganger in the Mojave Wasteland in 2281.

Carter was locked away at the NCR Correctional Facility after being framed over an undisclosed amount of caps by a pit boss while working in a casino in New Reno. During his time imprisoned, he was always known as the guy who could get things. This led to his career as a trader after the Powder Gangers took over the facility.

Retrieved from "https://fallout.fandom.com/wiki/Carter_(Fallout:_New_Vegas)?oldid=3173189"
Community content is available under CC-BY-SA unless otherwise noted.