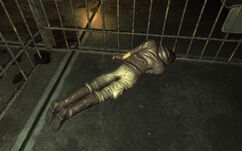 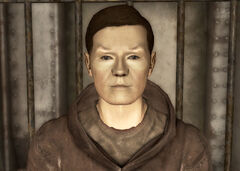 Carter, spawned to a living state

“Carter there escaped and managed to explore for a bit. He hacked a password off of the computer, and found the location of some guns. He was on his way to get them when the Fiends caught him again.”— Rick Lancer

Carter is an non-player character whose corpse is found in the Mojave Wasteland in 2281.

He is lying dead in a prison cell in Vault 3, which is occupied by a group of Fiends led by Motor-Runner. His friends, Rick Lancer, Rachael and ghoul Dennis are still alive and are trying to escape a certain death.[1]

Rick Lancer tells the Courier that Carter got out of the cell and found a password for an armory. Supposedly, he was heading there before Daniel was.[2]

Retrieved from "https://fallout.fandom.com/wiki/Carter%27s_corpse?oldid=3139145"
Community content is available under CC-BY-SA unless otherwise noted.