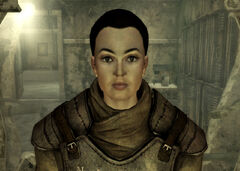 Carrie without her beret

“You stick out like a sore thumb around here. You sure you're in the right place?”

Lieutenant Carrie Boyd is an MP at Camp McCarran in 2281.

Carrie Boyd is highly observant and notes anyone who comes into McCarran,[1] as Lieutenant Boyd is the officer in charge of policing Camp McCarran.[2] Her duties are broad in scope, ranging from the mundane tracking of suspected AWOL soldiers,[3] missing rangers,[4] checking inventory discrepancies,[5] to interrogating captured prisoners of war.[6] A lot of work is required on Camp McCarran on top of general MP duties, [7] and Boyd often jokes that her job would be easier if she was allowed to "shoot anyone who talks back."[2] While the shooting part is a joke, Boyd isn't beyond contracting outside the NCR for expertise in enhanced interrogation techniques in order to skirt around the cumbersome humanitarian laws the Tandi administration put in place.[8]

Carrie Boyd is an avid smoker and retains a sarcastic and laconic demeanor in spite of (or perhaps because of) the amount of work on her plate. But Boyd is far more sadistic of an officer than her demeanor lets on, however. As mentioned before, she finds the humanitarian laws pertaining to the human rights of POWs as constraining and takes a wry pleasure in the act[9][10] and thought[11] of torturing and the ironic punishment of the prisoners she's in charge of.[10]

Boyd loathes Caesar's Legion like any NCR officer would and is invested in NCR's propaganda against the Followers of the Apocalypse, questioning whether the Followers as a whole are doing more harm than good.[12] Boyd also has little patience for anything outside of her expertise in policing and torturing and makes comments demeaning Tom Anderson's expertise on water systems.[13] Despite her constant sarcastic comments, Boyd does show her heart when a murder is involved and makes a note to contact the families involved to give them closure.[12]

After completing "Silus Treatment," she will move around the building, but can often be found in her office on the east side of the second floor.

Retrieved from "https://fallout.fandom.com/wiki/Carrie_Boyd?oldid=3504911"
Community content is available under CC-BY-SA unless otherwise noted.