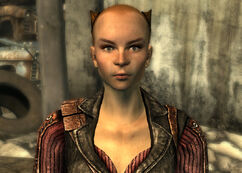 “Why, look at what we have here. Some fresh meat, right out of the Wastes! You just wanna go ahead and jump into the pen with the others, or should I beat you senseless and drag you there myself?”

Carolina Red is a cruel female slaver in Paradise Falls in the year 2277.

Perhaps the least pleasant slaver in the camp, Red is a stern-faced psychopath who was abused and tortured all through her life. Even her fellow slavers give her a wide berth. Red loves to tell stories about her father, who once cut the legs off a man just to watch and laugh as he attempted to crawl away before crushing his skull with a rock because he was bored. After she tells the story, she pauses and then mentions that, come to think about it, that was "pretty funny," illustrating just how sociopathic and twisted she has become - even for a slaver.[1]

Carolina Red appears only in Fallout 3.

Retrieved from "https://fallout.fandom.com/wiki/Carolina_Red?oldid=3259795"
Community content is available under CC-BY-SA unless otherwise noted.