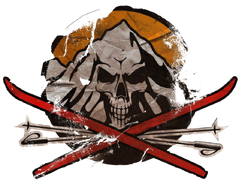 Carol Sweeney was a former raider of the Cutthroats.

Carol Sweeney was a tourist visiting Pleasant Valley Ski Resort when the Great War began. Like the other tourists seeking for survival, Carol became a raider and joined the Cutthroats. However, Carol did not stay with the Cutthroats for long. When David Thorpe caused the Christmas Flood that devastated Charlestown, Carol was appalled at what Thorpe had done and guilt-ridden for becoming an accessory.

She and a few other raiders left the Cutthroats and struck out on their own. Carol became the default leader of the group which took shelter in Big Bend Tunnel.[1] This group built a self-sufficient community isolated from the raiders and Responders. They even established a working relationship with the Brotherhood of Steel in which they traded technological components and weapon parts for supplies. Carol also befriended Brotherhood Knight Melissa Reische.

Like others throughout Appalachia, Carol's group's peaceful life was shattered by the advancement of the Scorched. By 2097, her group was one of the last few remaining survivors in Appalachia and, completely surrounded by the Scorched, made a last stand against the creatures. Prior to her death, Carol wrote a final entry in her journal in which she accepted her imminent death as recompense for her actions as a Cutthroat.[1]

Carol Sweeney is mentioned only in Fallout 76.

Retrieved from "https://fallout.fandom.com/wiki/Carol_Sweeney?oldid=3257857"
Community content is available under CC-BY-SA unless otherwise noted.