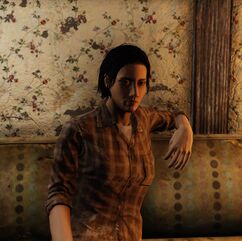 Carol Putnam is the owner of Lewis & Sons Farming Supply in Appalachia, living there with the rest of her family in 2103.[1]

Carol and her family returned to Appalachia in 2103 and made their home at the former farm supply store. The family first secured the barn before later returning to begin restoring the location. Carol claimed the Putnam's as rightful owners and inheritors of the location since George Putnam, her husband, was a cousin of Lewis, the previous owner, who died during the Great War along with his family. Carol uses the threat of her husband George and his shotgun as a deterrent to would be troublemakers.[1]

Carol informed the Brotherhood of Steel of a ghoul presence in the area which she believed had originated near Orwell Orchards based on the number of attacks in the area. After Carol's sons both express interest in joining the Brotherhood, she and George both agreed that one son could join, but the farm could not spare both of them.

Carol Putnam appears only in Fallout 76, introduced in the Steel Dawn update and is mentioned in One Wasteland For All.

Retrieved from "https://fallout.fandom.com/wiki/Carol_Putnam?oldid=3389049"
Community content is available under CC-BY-SA unless otherwise noted.