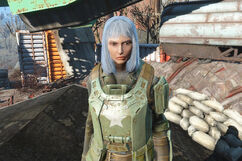 According to B-263's mission log, PR-15 was originally created by the Institute as a "highly optimized combat unit." At some point, she escaped the Institute and had her memories altered by the Railroad to give her the identity of Carol Janssen. She joined the Gunners and eventually rose to the rank of Captain, based out of the Gunner base at Hub City Auto Wreckers.

B-263, an Institute courser posing as a detective, discovered that she was meeting with fellow escaped synth R3-11, also known as the raider "Burner" at the Fairline Hill Estates. B-263 considered this "odd behavior" and speculated that the two might remember each other, suggesting that their memories were somehow returning. B-263 confronted the pair during one of these meetings but they managed to kill him and escape.

Early Retirement: After discovering B-263's mission log on his body at Fairline Hill Estates, the Sole Survivor can choose to confront and destroy Janssen and Burner, or destroy records of their identity at University Point.

Retrieved from "https://fallout.fandom.com/wiki/Carol_Janssen?oldid=3212704"
Community content is available under CC-BY-SA unless otherwise noted.