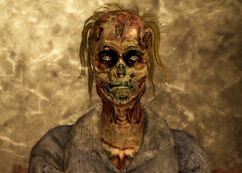 “You tell the same story for 200 years, you'll feel pretty uninteresting too.”

Carol is a female ghoul residing in the Underworld in 2277. She runs Carol's Place with her partner Greta.

Born in 2051, Carol was alive for the events of the Great War of 2077. Living in Washington D.C., Carol and her father had sought safety in a fallout shelter within the city proper[1], after the bombs began falling. Carol had barely entered the shelter, and was turning back to find her father who had stopped to help another family[2], when the thermal pulse from a nuclear explosion flash-vaporized him and knocked her unconscious. Hours later, Carol awoke and ran back to hopefully find him, but instead, she only found his shadow permanently burned into a wall. Other survivors then took Carol back into the shelter.

Carol did not stay in the shelter long, however. After the nuclear barrages ended, Carol ventured out into the city to seek a place to survive. Much of the city had either been reduced to rubble or was still aflame following the nuclear bombardment, but Carol was able to find safety in the relatively-undamaged Museum of History's "Afterlife" exhibit. Carol has been there ever since.

Over time, more survivors gravitated to the museum, almost all carrying stories of the lawlessness and chaos of the wasteland. This further convinced Carol to remain in the museum. However, as time passed, Carol and many of the other survivors began noticing odd physiological changes, with dry, flaking skin being dominant. Although the rate at which the disorder progressed varied from person to person, the end result was ghoulification: the entire population of the museum had become ghouls. While some had eventually turned mad or even become glowing ones, others, like Carol, just accepted their transformations.

It is unknown if these "mad" ghouls were ferals or if they just went insane from the psychological damage caused by the transformation.

Carol is perhaps the sweetest ghoul you'll ever meet. The fact that she's a hideously deformed ghoul hasn't stopped her from wearing a sundress, smiling pleasantly, or sharing a warm hello with anyone who crosses her path. She always wanted to open a bed and breakfast, and Carol's Place is her dream come true, although everyone has noticed that she's been a bit down lately.[3]

Carol met another ghoul named Greta in the mid-2210s, whom it is implied she is in a relationship with[4]. For over sixty years, the two have jointly run Carol's Place, with Carol handling sleeping arrangements and Greta serving food[5].

At an unspecified time prior to the emergence of the Lone Wanderer from Vault 101, Carol befriended and "adopted" a ghoul named Gob. This caused a small rift between her and Greta, which Carol would later ascribe to jealousy. Whether or not that was correct, Gob later moved out and carried on the family tradition as a barkeep in Megaton, and the relationship between Carol and Greta stabilized, though Carol often worries about Gob's well-being.

Carol performs basic hotel keeping duties such as sweeping and renting out beds.

If both Gob and Greta are killed, Carol will become despondent and mope around in her shop.

Carol appears only in Fallout 3.

Retrieved from "https://fallout.fandom.com/wiki/Carol_(Fallout_3)?oldid=3245361"
Community content is available under CC-BY-SA unless otherwise noted.