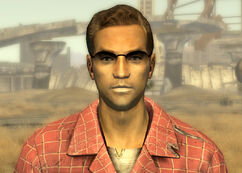 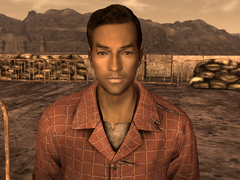 Carlyle without his glasses

“Keep your distance. Who are you, and what do you want?”— Carlyle St. Clair III upon meeting the Courier

Carlyle St. Clair III is a hermit living in the Mojave Wasteland in 2281.

Carlyle St. Clair III was to be the heir of a mercantile family empire, but cut ties with his family and left for unspecified reasons. Now a wastelander, he was the original candidate for the dish the White Glove Society would dine on for Mortimer's banquet. Before he could get captured by the White Gloves, Carlyle escaped and headed to a shack which became his house. He is very suspicious about outsiders coming to his doorstep and has never left his house since he escaped from the Ultra-Luxe.

Retrieved from "https://fallout.fandom.com/wiki/Carlyle_St._Clair_III?oldid=3107647"
Community content is available under CC-BY-SA unless otherwise noted.