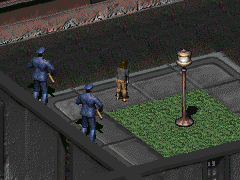 “My dad's Vice-President Carlson, so you better treat me nice! Who are you?”

He is the son of Frank Carlson, a congressman. He looks like a spoiled and fat little boy.

Murder Carlson in NCR: Mr. Bishop wants Carlson out of the game. The Chosen One plant a bomb on the kid, resulting in him running to his father, killing them both.

Carlson's kid appears only in Fallout 2.

Retrieved from "https://fallout.fandom.com/wiki/Carlson%27s_kid?oldid=3301812"
Community content is available under CC-BY-SA unless otherwise noted.