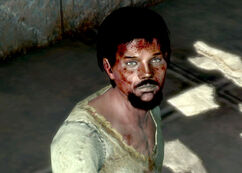 Carlos is a homeless water beggar sitting across the bridge from Rivet City in the year 2277.

Driven slightly demented by lack of sustenance and fearful of his life after a narrow escape from a super mutant bonfire, Carlos has set up a begging station at the entrance to Rivet City. Through the haze of dehydration, he remains hopeful that a water caravan or kindly stranger will cross his path.[1]

Carlos appears only in Fallout 3.

Retrieved from "https://fallout.fandom.com/wiki/Carlos?oldid=3450037"
Community content is available under CC-BY-SA unless otherwise noted.