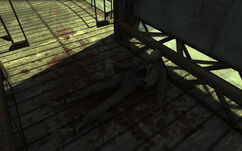 Carlo was an employee of Vim! Pop Incorporated before the Great War.

Carlo was a Vim Ambassador, whose role was to wear power armor with a custom paint job. He was to travel with an advertising truck and hand out bottles of Vim, answer questions and give contact information for the Vim sales and distribution team.[1]

He was warned by Willis Rudd that he was "literally walking around with a target painted on his back" for the saboteurs against the company, as several shipments were lost, property stolen, and employees assaulted.[2]

He continued with his job until the eruption of the War, killing him. His skeleton can be found in the back of a truck north of the National Park visitor's center, with his custom-painted T-51 power armor.

Carlo appears only in the Fallout 4 add-on Far Harbor.

The Vim Ambassador truck
Add an image to this gallery

Retrieved from "https://fallout.fandom.com/wiki/Carlo?oldid=3149288"
Community content is available under CC-BY-SA unless otherwise noted.