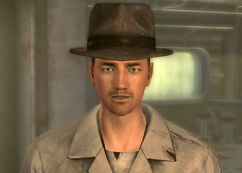 “If you're smart The Strip's all flash and noise, if not luck's your dame and your hot date until you find out she's a cheap whore high on jet.”

Carlitos Wayne was a made man working as a minor member of the Omertas at the Gomorrah hotel and casino. Unfortunately for him, he ran afoul of Omertas lieutenant Cachino over his relationship with one of the prostitutes, Joana. Since Cachino also wanted her, he accused Carlitos of stealing Omertas funds and put a price on his head. Since then, Carlitos has been on the run.

Carlitos is hiding out in the Vault 21 hotel as a guest of Sarah Weintraub. He can be typically found in the hotel's diner sitting at a back table. Alternatively, Carlitos may be located in a back room away from the hotel's patrons as befitting a man on the lam.

Killing him while detected nets the player character Infamy with the NCR.

Carlitos Wayne is named after the film "Carlito's Way."

Retrieved from "https://fallout.fandom.com/wiki/Carlitos_Wayne?oldid=3247684"
Community content is available under CC-BY-SA unless otherwise noted.