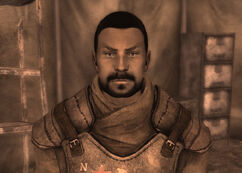 Restoring Hope
ED-E My Love
Tags of Our Fallen

“The Major let me send out some troops to gather supplies, but unfortunately they never returned. I'm guessing they ran into some trouble on the way. You can help by finding the troops and assisting them in bringing back any supplies they found.”

Quartermaster Carl Mayes is a New California Republic officer stationed at Camp Forlorn Hope in the Mojave Wasteland in 2281. Usually, he can be found in the tent across from the storage shed.

Carl Mayes is the quartermaster at Camp Forlorn Hope in 2281, in charge of procurement and distribution of supplies. Short on personnel, as well as supplies, Mayes will take any and all help he can get

However, because he is unable to leave the camp personally, he needs someone to go out and bring back supplies. He had previously sent people to HELIOS One to see if they had any supplies they could spare, but they have not yet returned. Ever since the Legion took over Nelson, there has been an increased strain on Mayes, as well as the other servicemembers.

The Courier can play Caravan with Mayes. However, he will only play a maximum of five games.

Retrieved from "https://fallout.fandom.com/wiki/Carl_Mayes?oldid=3173179"
Community content is available under CC-BY-SA unless otherwise noted.