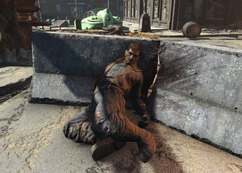 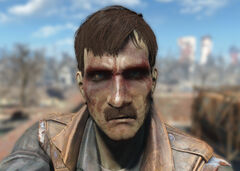 Carl Everett is a deceased fixer found at Jamaica Plain in 2287.

A fixer, Carl took a contract that resulted in a bounty being placed on his head. On August 22, 2287, Sal, an ex-Gunner and bounty hunter, tracked him down and gave him an ultimatum to give her the equivalent in caps within ten days or she would turn him for the reward. Despite his best efforts, and communicating to all his contacts, the only short-term opportunities were for mercenary and mechanic work. Desperate, he came up with an idea to find the fabled treasures of Jamaica Plain.[1] On September 1, he pitched the plan to Sal and she accepted.[2]

After successfully convincing her that he could pull together a team, he called in favors and enticed several acquaintances to the team[3] with the promise of an even split in the loot.[4] All the while, Carl hoped that Sal and the others would not catch on to his eventual betrayal and abandonment. By September 22, the month-long preparations were in order, learning of the nearly unheard of security and complete lack of description on what it was guarding.[2] However, unbeknownst to Carl, virtually every other member of the team was planning to betray and murder at least one other person on the team.

By October 5, all members of the team (Carl, Sal, Luke Silverhand, Ken Standish, Tanya Standish) had gathered near the town. With Sal's insistence, Carl accompanied them into Jamaica Plain itself, knowing full well that once they unlocked the treasure, Sal would just kill the team and keep the loot for herself. Unable to extradite himself from the situation, he believed that he wouldn't make it out alive.[5] By the next day, however, no one was willing to fight together. At the first sight of a feral ghoul they split, each trying to stand their own against the hordes.[6] Carl made it to the main road's traffic barricade before he was overwhelmed and killed.

Carl sounds like a ghoul in the invitation he sent to Ken Standish prior to the failed operation.

Carl Everett appears only in Fallout 4.

Carl's body may clip through the ground, making interacting with him impossible without the use of the tcl console command. [verified]

Retrieved from "https://fallout.fandom.com/wiki/Carl_Everett?oldid=3288698"
Community content is available under CC-BY-SA unless otherwise noted.