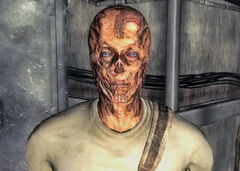 Carl is a ghoul found dead, near Dunbar, in the Old Olney underground in 2277.

Carl appears only in the Fallout 3 add-on Broken Steel.