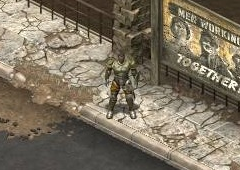 “You're too late! A raider attack surprised us last night. Most of the town guards are dead and the mayor's held hostage somewhere. You guys have to help us. I've never seen raiders like these before, but they went straight for the mayor and, after that, they started going after all the ghouls. We've got enough racial problems in this town without the raiders having to join in.”

Carino was a town guard in Springfield in 2197.

Carino is the head of the town guard who is waiting for the Brotherhood since he doesn't have the firepower to get the job done. He explains the situation with the captured mayor and the racial tensions in town.

Carino appears only in Fallout Tactics.

Retrieved from "https://fallout.fandom.com/wiki/Carino?oldid=3298838"
Community content is available under CC-BY-SA unless otherwise noted.