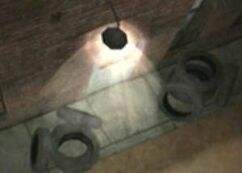 Carbon warehouse is a place in the town of Carbon.

It is a pre-War warehouse of hazardous materials, connected to a facility which stood on the place of Carbon Crater in the past. Now, it is infested by mutated animals, most notably giant rats, radroaches and radscorpions.

The former undergo unique mutations due to the Carbon crater's high radiation levels. Many spitting and glowing radscorpions, along with a giant one, could be found there. All the mutants were wiped out by the Initiate of Brotherhood of Steel, who visited the town to find his comrades. Later, when the raiders attacked Carbon, the warehouse becomes a place of hiding for the majority of the population.

The warehouse's main storage is where the Initiate enters. Inside is a typical warehouse facility with lots and lots of crates, some may be destroyed for loot. Medical supplies can be found in this area, near the exit to auxiliary storage. During Kill Warehouse Radscorpions, this area exits to the storage, and back to Carbon.

During the Defeat Raiders quest this area exits to the railyard, and back to Carbon.

The warehouse's auxiliary storage is another part of Kill Warehouse Radscorpions. This area has exits to the second floor, basement, and back to the storage.

The second floor is another part of the warehouse that the Initiate must access as part of Kill Warehouse Radscorpions. There are a couple of cranes on the second floor, one must be used to move a crate blocking the entrance to the Warehouse Basement. The only exit is back down to the auxiliary storage.

The Warehouse basement is home to a giant radscorpion. The player character must fell this beast as part of Kill Warehouse Radscorpions. On entering this section a new quest to Kill Giant Radscorpion will be given to the Initiate. The only exit is back up to the Storage.

Below a list that is considered notable loot in these early stages of the game.

This warehouse appears only in Fallout: Brotherhood of Steel.

Retrieved from "https://fallout.fandom.com/wiki/Carbon_warehouse?oldid=3239286"
Community content is available under CC-BY-SA unless otherwise noted.