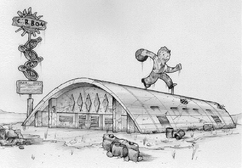 Carbon mill is the main base of a large group of raiders that live in Carbon and is only accessible during the Defeat Raiders quest.

The raiders here are strictly matriarchal and are currently being led by a loose group of female lieutenants, which in turn are led by Jane, their matron. They are notable by a yellow decal that they use to differentiate themselves from other raider groups. The mill their main base is set up at was also used to trade slaves to Attis, leader of the Attis Army.

The exterior of the mill consists of a few streets, a railroad, and a parking lot, while the interior includes offices, storage, generator room, and grinder. The generator is still functional and is still being used by the raiders to power lights and security locks. Plus, the generator supplied grinder, whose vibrations were liked by the matron Jane, who made her home there.

The railyard is one of the locations the player character will encounter on their way from the Carbon Warehouse while on the Defeat Raiders quest. The area is protected by raiders and land mines. Inside the railyard, there is a raider camp where the player character will find a few weapons in the process of repair that cannot be picked up. Ruby's necklace can also be found in the railyard.

This area connects the Mill exterior and the Carbon warehouse.

The mill exterior is another section of Carbon on the way to the mill. This area is also protected by raiders and land mines. This area connects the parking lot.

The mill parking lot is safe from raiders. Here Jesse is ready to sell goods and give away advice on the next step on the quest. This area connects to the storage area and the grinder area.

The mill storage area is a warehouse for the mill. This area is also protected by raiders. Vault 13 flask can be found in this area. This area connects to the mill generator area, mill Office Area (inaccessible), and back to the mill parking lot.

The mill generator area is an industrial complex housing the generator for the mill. Once the generator in this is activated it will malfunction, causing alarms to go off and consequentially an explosion in the mill grinder area. This area connects to the mill office area, and back to the mill storage area.

This area contains a lot of the industrial complex of the mill. Hazards here include leaky steam vents and electrical bolts being shot from Tesla coils. This area connects to the mill storage area, and back to the mill generator area. It's also the place where the difficulty level rises as the raider lieutenants start throwing home-made bombs. On the other hand, they also leave them for the player character to pick up after dying.

Upon entering the mill grinder area the player character will witness a confrontation between Jane and the super mutant leader Attis. Their discussion will be cut short due to an explosion caused by a chain reaction from the generator's activation. The Initiate will then confront Jane and a fight will follow. Electric volts arcing across part of this area pose a hazard through the fight. This area connects with the parking lot.

The Carbon mill appears only in Fallout: Brotherhood of Steel.

Retrieved from "https://fallout.fandom.com/wiki/Carbon_Mill?oldid=3239287"
Community content is available under CC-BY-SA unless otherwise noted.