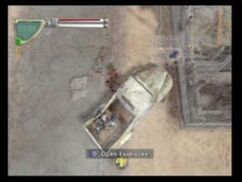 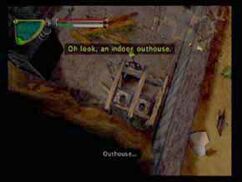 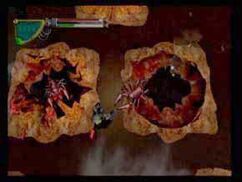 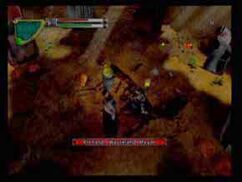 Carbon crater is a giant hole in the earth near the town of Carbon in 2208. It is filled with ruins of buildings and cars, as half of the pre-War Carbon ended up there. The crater is a place of many points of interest.

Firstly, before the war, a large facility specialized in hazardous materials was located here. Lots of drums and pipes with radioactive goo, as well as Carbon warehouse are all left from this facility. Also, some mining took place here, although it's unknown what kind of mineral resources were being extracted. The crater consists of the upper level, lower level, and the pit.

Due to a high amount of radiation, the crater gave birth to some unpleasant sub-species of radscorpions. This includes glowing, radioactive ones, the ones that could spit poison and the most dangerous of them, gigantic scorpions which are nearly the same size as a bus. Now these critters live all around the crater along with some radbugs and giant rats.

The crater collapses after the fight between the Initiate and the mayor of Carbon, Richard. Richard uses lots of explosives, and the explosions cause the area to become unstable. After the Initiate makes his way out from the crater, it becomes unavailable to be visited again.

The Crater Upper Level is where the player character first enters the Crater. It has several abandoned homes, dangerous crevices leading lower, and a farm.

A dead cat can be found in a building just to the East of the entrance. This is Ruby's cat Mr. Pussy.

This area exists to the Crater Lower Level, and back to the town of Carbon.

The Crater Lower level is just more of the crater, with even more dangerous pits leading to certain death. When entering this area the Initiate will find radscorpion nests that will pop open on approach, revealing the nesting radscorpions. On the escape from the crater, a couple of giant radscorpions will be waiting in the nesting grounds.

This area exists to the Crater Pit, & back to Crater Upper Level.

The Crater Pit is the last section of the crater and is little more than a cave where Richard claims to be a pre-War excavation site for dinosaur bones. It is decorated by a circle of cars, half-dug into the ground. The Initiate fights Richard in this room.

The only exit is back out to Crater Lower Level.

Carbon crater appears only in Fallout: Brotherhood of Steel.

Retrieved from "https://fallout.fandom.com/wiki/Carbon_Crater?oldid=3239292"
Community content is available under CC-BY-SA unless otherwise noted.