Carbon is a town built over the remains of the pre-War city of Carbon, Texas, and the first place encountered in Fallout: Brotherhood of Steel. It is a small community of agricultural and brahmin farmers.

Carbon is governed by a mayor named Richard until deposed by the Initiate and replaced with Vidya. Carbon is located right next to a large crater that was caused by the Great War and half of the town fell into it. While the town itself is split into east, west, north, and central, the town center is the only part the player character can access when not involved in a quest. The Brotherhood of Steel sent the Initiate to Carbon on their first mission, to find and assist several Brotherhood paladins believed to be in the town.

Carbon is divided into eight areas: 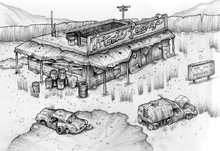 The Atomic Diner is owned by Armpit. Once it is liberated by the Initiate from a group of local raiders, it is open for normal business. Once reopened, the Wasteland Stranger, Ruby and Armpit himself can be found inside. The bar was burned down when raiders came again, this time to destroy the whole town, and its owner dies near the door of his own place. Before the travel of the Initiate to Los, the carbon bar is restored but is closed.

Carbon is based on the real world location of Carbon, Texas.