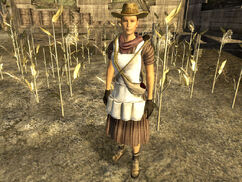 A caravaneer is any individual that is involved in some way with a caravan. In the Mojave Wasteland, most caravaneers are employed by the Crimson Caravan Company. A few people considered as caravaneers can also be encountered at the Mojave Outpost in 2281.

The hired hands of the local Crimson Caravan branch are contracted and their boss, Alice McLafferty, makes it a point to ensure that they know what they're signing up for, not hiding anything in the terms with fancy talk.[1] Most of the caravan's employees reside in quarters located on-site at the branch's main compound on the outskirts of New Vegas. While not on the road, caravaneers perform various chores to support the caravan, such as tending to the pack brahmin, cleaning their pens[2] and cataloging sales and deliveries.

At the Mojave Outpost, some of the travelers coming in from California on their way to Vegas are referred to as caravaneers, implying that they arrived alongside the caravans, accompanying them for protection while out in the desert. The caravans and travelers are stranded due to the presence of dangers on the way to the city, such as Powder Gangers and giant ants. Ranger Jackson, who is in charge of the outpost, wants to get the caravans moving again, but a lack of manpower eventually prompts him to hire the Courier to clear the road.[3]

The Mojave Outpost caravaneer
Add an image to this gallery

Retrieved from "https://fallout.fandom.com/wiki/Caravaneer_(Fallout:_New_Vegas)?oldid=3232176"
Community content is available under CC-BY-SA unless otherwise noted.